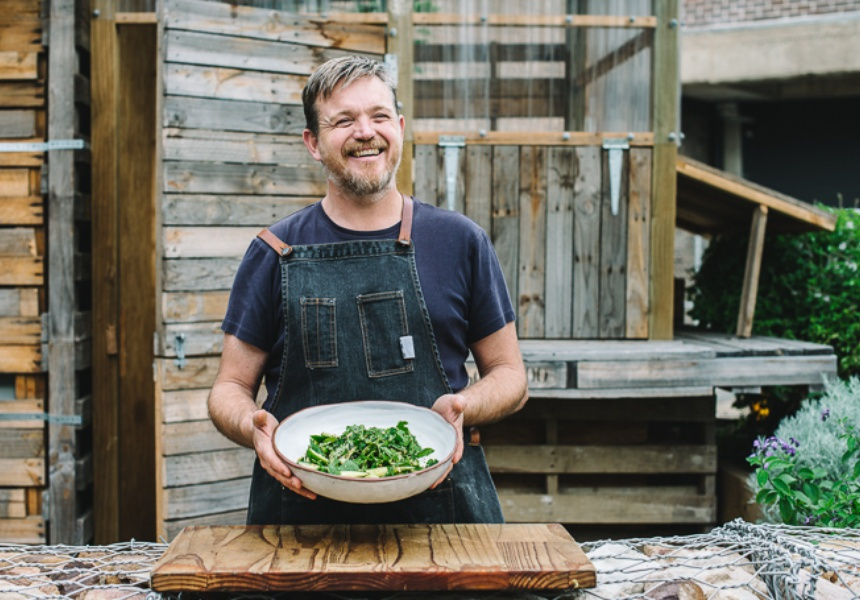 How did you first get involved with growing and cooking with locally grown food? Was there a pivotal experience or moment?

Some people are slow learners. I unashamedly put my hand up to being such a person. It took 20 years of cooking before I had my epiphany, and since that moment it has influenced every day of my life.

The year 2009 was very big on all fronts in my household. My wife, Joss, and I had been back in Australia for three years and were desperately missing Europe. Joss was also pregnant with our third child, who was due in autumn, and she wanted to be near her family in England. And I – well, I knew it was time for me to make a change and think about opening my own restaurant, instead of working in someone else’s.

So when William was born we made the pivotal decision to pack up our life in Australia and fly back to the UK in search of utopia.

One week before our flight, we had a catastrophe. William got very sick. He was only 6 weeks old and was diagnosed with meningitis. During his time in hospital, it really hit home that there was a lack of fresh nutritional food available to patients. The food consisted of things like dehydrated mashed potato, heavily processed bread, preservative-laden juices and sugared cereals. There was simply no fresh food to heal and nourish – just processed food to poison.

We landed in the UK in July of 2009 to the most glorious summer. The hedgerows were bursting with berries, the sun was shining and life was good. Our aim was to base ourselves at my mother-in-law’s small-holding farm in Wales and travel through the UK in short spurts, looking for our new place to call home. The best way to achieve this was to send our two eldest boys, George and Alfie, to the local village school and take William with us.

On our travels we saw some beautiful countryside, but what interested us most was life on the farm. Joss’s family farm is a truly beautiful property. Some 12 hectares (30 acres) of organic farming land are used to raise speckle-faced lambs, Hereford and longhorn cattle and saddleback pigs, and there is one of the oldest apple orchards in Wales as well as a fertile kitchen garden. Joss’s family was self-sufficient and a picture of health and happiness. They cut their own wood for the fires, had photovoltaic cells and wind turbines to generate power, and grew nearly all of their food. I was hooked and I loved it.

To complete the idyll, I built a brick oven next to the wood shed, using a set of Alan Scott plans, and started baking sourdough. I kneaded 30 kg (66 lb) of dough by hand twice a week. I fired up the oven at 2 in the morning and baked 1.5 kg (3 lb 5 oz) loaves to sell to the locals at school drop-off.

We were living the dream, picking blackberries, gooseberries, raspberries and currants in summer; damsons and early pears and apples in autumn, eating what we could and turning the rest into jam. The garden was a true revelation. I had lived in Europe previously and understood the seasons very well, but growing the produce and eating it straight from the tree was another level. This was my ‘road to Damascus’ moment, a cartoon light bulb going ‘ping’ over my head.

At the time we were at the farm, a local ‘apothecary’ naturopath had also begun to section off four beds in the kitchen garden to create a Hippocratic garden, using the four humours of the body as her guide. Not only were these beds beautiful to look at, they were also stuffed full of medicinal plants and herbs to help relieve medical symptoms. The beds were divided into the humours, or temperaments: sanguine, choleric, melancholic and phlegmatic. It was fascinating to me that she looked at these herbs as medicinal, while I saw them as culinary. From that moment, the phrase ‘you are what you eat’ became truly profound to me.

For the past decade I have noticed the rise in people’s interest in good health, and so many fads and diets have been and gone. At Kitchen by Mike I have always focused on fresh, seasonal food and, in doing so, have unconsciously endorsed and promoted healthy eating and wellbeing. It has shaped what my restaurants have become. My interest in health is neither Western nor Eastern. I simply believe in a balanced diet, eating whole foods and all things in moderation. I also believe in using natural medicines to stimulate and assist the body when it’s not 100 per cent healthy. I believe that food – and by food I mean all edible flora and fauna in its purest form – is nature’s medicine. 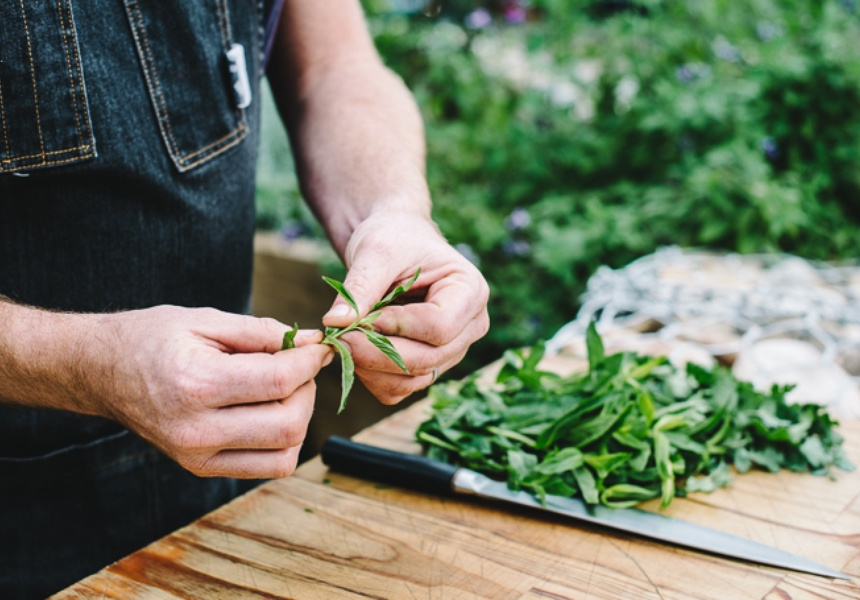 What would you say to someone who is thinking about taking up growing edibles?

Do it straight away. The benefits of eating your own food is not only satisfying but knowing everything about that ingredient including the soil it’s grown in and the care that has gone into it is the most rewarding and beneficial food you could ever eat.

Do you grow edibles at home? If so, what’s growing on?

We grow lots of herbs at home as we don’t have a lot of space. My favourites are a myer lemon tree that produces the sweetest lemons you could ever taste and my curious succulent, the Cuban oregano plant which grows like wild fire and is amazing chopped and thrown through salads raw or used in cooking. We keep a large compost bin and it’s my job to maintain it which I really enjoy.

Do you have a favourite native / indigenous foods you like to grow?

I have a lilly pilly bush that I make cordial from the fruit. Besides mixing with a little soda water, it’s delicious put into a glass of champagne to make an Ozi version of a Kir Royale.

What is your favourite veg to grow and why?

I love growing peas and green beans. They’re so beautiful the way they climb up the bamboo stalks and intertwine with each other.

Another great vegetable is the artichoke. If you don’t pick it when’s it’s absolutely perfect, that’s ok because it will grow into the most beautiful flower instead.

Any tips on using the whole vegetable to reduce food waste?

You will see in the Pick Me Up tonic recipes that beetroot kvass uses the whole of the vegetable and more. Firstly, we cut the whole beetroot up to ferment in water and salt to produce a probiotic beverage. Then instead of throwing away the fermented beetroots, I like to grate them into salads so not only do you get the wonderful flavour and fibre, you get a second hit of its probiotic goodness.

Kitchen by Mike was a trailblazer of the local and ethical food movement in Australia. But what is the backstory with respect to Mikes Table? What was this and what role did it play in helping to bring Kitchen by Mike to life?

After nearly a year of baking at Iggy’s the need to cook as well as bake returned. My wife Joss put it very plainly: ‘Mike, you don’t need a big fancy restaurant. All you need is a stove to cook on, and a table to eat from.’ Such clarity! She was absolutely right, of course. All I wanted to do was cook. As soon as I realised I didn’t need the million-dollar fit out, I could think outside the box. And once I did that, there was no box. All that mattered was the food and people enjoying it.

As luck would have it, I found one of the most charming spaces in all of Sydney for my return to the stoves. The result was a yearlong series of pop up diners at my friend Andrew Forst’s French/ chic antiques and interiors showroom in Surry Hills, ici et la. While Andrew made napkins from striped-canvas offcuts of his signature deck chairs, I borrowed plates from friends and brought in the beautiful silver cutlery my grandmother had given me. Mike’s Table took the format of a 5-course seasonal set dinner offered on alternate Sunday’s – a moveable feast for 42 people. There was no kitchen; every fortnight, I had to hire a three-ring gas burner and a small oven, along with two trestle tables. I would visit the markets and base the menu on what I found there. It was totally off the cuff, and it was totalling exciting.

Can you tell us about your Physic Garden at Kitchen by Mike in Rosebery and your ‘Pick Me Up Tonics’?

1. the art or skill of healing

2. a medicine, especially a cathartic

Kitchen by Mike has always focused on fresh, seasonal food and in doing so has unconsciously endorsed and promoted healthy eating – preparing meals with produce that is local and with as little done to the ingredients as possible is paramount.

The Physic Garden was first introduced at Kitchen by Mike in Rosebery in 2013. Inspired by my mother in laws medicinal herb garden in Wales as mentioned above, I became interested in the specifics of plants as medicine. I planted the garden, the FIRST of its kind in Australia, with health at the forefront of my mind. It was the inspiration for the second cook book Real Food by Mike.

The Physic Garden was divided into five key medicinal categories according to their traditional uses:

Different ingredients do different things and every day we feel different from the day before. The pick me up tonics’ recipes are a great way to incorporate particular ingredients into your daily life and give you a pep in your step.

Your pickling skills are supreme. Do you have a favourite pickle?

Top 3 favourite songs for the garden?

I’ve never really thought of this but Vivaldi’s Four Seasons comes to mind.

How to Compost: A Beginners Guide

What to Grow in Autumn in Australia