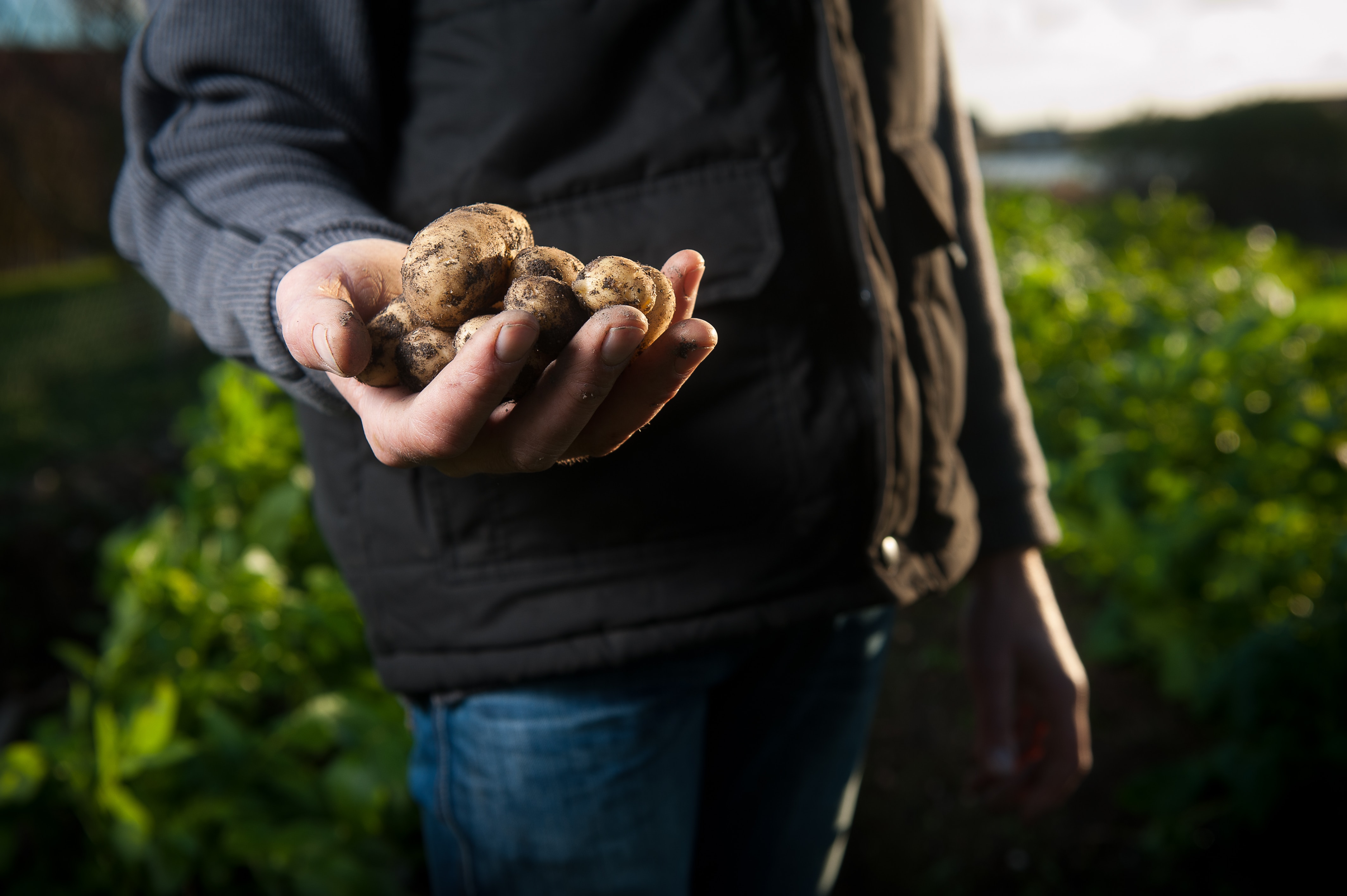 Arguably the most versatile vegetable out there, it’s time to bring the humble spud to your patch. Here’s how.

The average Australian now consumes over 50kg of spuds every year! Although we consume a lot of potatoes, it’s not a common crop many of us include in our veggie patch. With so many tasty and quirky potato varieties around, why not give it a go during the next growing season? Follow this guide to learn how and when to grow potatoes, as well as how to make the most of them once they have been harvested.

There are endless varieties of potato, with every colour and flavour combination imaginable. Deciding which variety to grow can be confusing, so we’ve made it easier for you by selecting a few of our favourite potatoes:

Desiree: First grown in the rainy Netherlands, it’s actually resilient to drought, as well as many of the diseases that plague other potato varieties, making it a tough-spud and easy grower. Once harvested, this redskin potato is a brilliant all rounder in the kitchen too.

Ruby Lou: An Australian cultivar not dissimilar to the Desiree with beautiful ruby-red skin and white-yellowish flesh. It’s a high yielding variety and yet another great all-rounder potato, thanks to its mild flavour, resistance to disease, and overall ease of growing.

Pink Fir Apple: Named after an apple, shaped like a banana, this is a potato unlike any. The waxy flesh of Pink Fir Apple potatoes has a very distinctive earthy flavour and is great for making salads with.

Dutch Cream: With a named that makes more sense than the last, this variety also stems from The Netherlands and has a creamy texture and flavour, making it perfect for mashing! It’s easy to grow and produces relatively large ‘tatoes.

How to Grow Potatoes

To grow potatoes you’ll need something called a seed potato, which is a potato with already growing ‘eyes,’ or shoots. Don’t be deceived by a potato from the supermarket that’s developed shoots, as these don’t always grow successfully. Instead, head to a local gardening center or order certified seed potatoes online. You may even know someone local with some to spare!

A little pre-planting prep! Keep only one shoot per seed potato. This means you may have to cut those with multiple shoots up into smaller pieces. Expose your seed potatoes to light for around a week before you plan to plant them into the soil; this helps them to develop their shoots and prevents mold by keeping them hard and dry.

Now for some TLC. Potatoes require rich, well-drained soil with plenty of compost or well-rotted animal manure, mixed with straw. As with many crops, avoid fresh manure as it will be too harsh for you’re young spuds. Prepare your bed by digging trenches 40 cm wide and 20 cm deep and place your seed potatoes around 30 cm apart along the bottom. Fill the trench first with a layer of manure, followed with normal top soil. Finally, water the bed and with a little bit of luck your potato shoots should start to appear after one or two weeks.

Small space gardeners, you can grow potatoes too! You’ll need a container that’s around 50 cm deep, with holes in the bottom for drainage. Fill the container with 20 cm of compost mixed with straw mulch. Place your potato seedlings on top of this layer and then cover up with more compost and mulch mix and water well.

While potatoes like the darkness provided by soil, your potato patch needs a lot of sun! Plant between April and May if you’re located in a tropical climate of Australia. In all other areas you’ll need to hang in there till later in the year - use the table below to find out when to plant potatoes based on your climate.

Soil: Potatoes also love slightly acidic soil, so make sure the soil pH is around 5.0 to 6.0. Your local garden centre will have special fertilisers for enhancing the acidity of your soil slightly, for other methods on this topic check out this guide on lowering your soil pH.

Mulch: As well as mixing mulch into your soil, you’ll also want to use a thin layer of straw mulch on top of the soil and around your potatoes. Straw mulch can keep the soil moist as well as reducing the chance of weeds invading the space.

Water: You’ll want to water your potatoes generously after planting. After that it’s all about keeping the soil moist but not drenched.

Positioning: Potatoes have a family fued with other members of genus Solanum, such as tomatoes and eggplants. Growing them in close proximity can destroy your crop entirely so be wary.

How and when to harvest Potatoes

Depending on which variety, your potatoes could be ready to harvest anywhere between 15 and 20 weeks. When the plant itself has died down and the lower leaves have gone yellow, you know your spuds are ready. But there’s no rush! Potatoes are happy to be kept in the soil, so it’s generally a good idea to leave them in the ground until you’re ready to use them. When you’re ready, you’ll want to use a garden fork to gently dig up your tubers.

Once you’ve pulled your potatoes out of their comfy bed, they won’t like the light. Store them in a dark, cool spot as soon as possible. Exposure to light will make your potatoes go green, and green potatoes are poisonous! Your potatoes will store for several months if kept at a cool temperature in a paper bag, cardboard box or wooden crate. If you wish to preserve your potatoes for several months, then be sure to select varieties that store well - try Elba, German Butterball or Yukon Gold.

Potatoes are ideal if you’re in the mood for a hearty meal. If you love garlic then try out this simple crispy garlic and roast potato recipe. Another favourite of ours is this cheesy hasselback baked potato recipe, perfect if you’ve got guests to impress! Potato salads are another great way to use your freshly harvested produce. Try this Australian style potato salad recipe in time for the next BBQ season.

What to Grow in Autumn in Australia

Christmas Gifts from the Garden